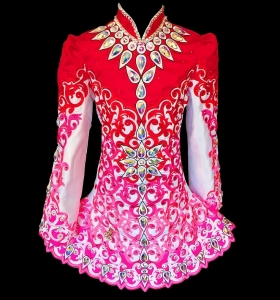 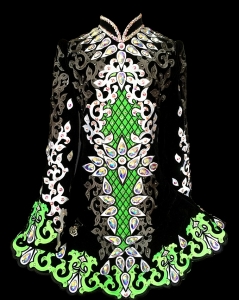 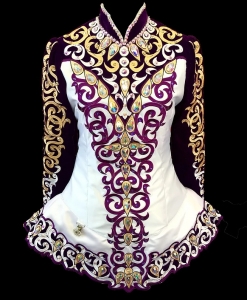 Kerry Houston comes from a deep rooted background in the world of Irish Dance.  Under the instruction of her mom Sally Houston, Director of The Houston Academy of Irish Dance, Kerry started dancing at a very early age.  Having won countless Regional and National titles, along with placing at numerous World Championships, Kerry consistently maintained a top 5 finish at the North American Nationals through out her dancing career. She then became the first of two female Canadians ever accepted into “Riverdance-The Show.” Kerry toured with the show for nearly seven years and during that time, she was offered a position as Assistant Dance Director in the Head Office in Dublin, Ireland where she assisted in managing the three existing companies who were touring simultaneously. ​

Kerry’s love of dance was equally matched with her love of costumes.  With such well versed history and experience in the dance scene, it was only natural that Kerry would take up designing dresses for fellow dancers and eventually her own students when she gained her TCRG.  For many years Kerry has been designing dresses and sending them off to Brand Name Designers in hopes that one day she too would be able to recreate her own designs with her own skills.  She decided to pull out the sewing machine and put the extensive sewing skills that her mother taught her to good use and decided to make a few dresses as a hobby to see how it would turn out.  After some time she made a few costumes for her students and she was hooked.

With her vision clear, Kerry was now in search of someone who shared the same passion of these costumes.  Deciding to finally bring her dream to life, it didn’t take long for her to call Lucy of Celtic Art Designs.  Lucy has been a huge part of The Houston Academy having made numerous solo and team dresses for the school.  And more importantly, she put up with Kerry asking her millions of “can we do this or that?” questions!  Having joined forces for a short while, Kerry in Calgary and Lucy in Red Deer, Kerry and Lucy designed and created several OTR costumes for dancers around the globe. Thanks to Lucy’s guidance and costume expertise Kerry was then able to go for it alone to become Kerry Designs.

“I am so grateful to my mom first and foremost, for teaching me how to sew and I’m equally grateful to have someone like Lucy show me the ropes in the costume world.”

Kerry is thrilled to be living her dream creating one of kind Irish Dance Dresses.  The support from the Irish Dance community has been overwhelming and continues to inspire with each creation.