A mini-rant on manners gave me the idea for this post. Enjoy! 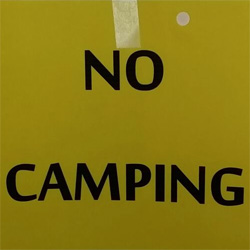 A few weeks ago, during a feis, I posted a little mini-rant on my Facebook page. When the rant received nearly 80 likes and had almost 40 comments, I knew that maybe I had struck a nerve. The rant was centered around feis courtesy, in particular, ‘camping abuse’.

Camping, if you are not familiar with the term, and based on some of the comments from our non-US followers you may not be, is the term used for the act of storing your gear during a feiseanna. Generally camping areas are setup, and in lots of feiseanna, there are areas also marked ‘No Camping’. These areas are typically marked to ensure uninhibited flow through the feis venue, and I would bet that most of them are established to meet safety code in case of emergencies like fires. The term is also used for the act of storing your feis gear, even if it is not in a camping zone, i.e. ‘Bridget camped in the elevator’.

The rant involved people who camped in areas clearly marked ‘no camping’, getting so bad at one point that they had over half of the walkway through the venue blocked with zucas, suitcases and blankets. The rant also mentioned, and actually started with, the people that spread their gear over entire rows of seats at a stage, and whom never really use the seats as seats. Comments included thoughts on those subjects, and other less considerate acts seen at feiseanna. And with that, the subject for this post was born.

I have noticed an un-nerving trend of people, to quote John Pinette, ‘losing their cherub like demeanor’, and leaving their common courtesy, and maybe even their common sense at home on feis day. I get it, trust me. The frantic pace of the feis; trying to get as ready as possible at home or in some hotel, get to the venue on time, find the stage(s), scout a good location to store the gear, get setup, get dressed, etc…. We actually had one feis in St Louis where TGC’s comp was next to check in for her first dance when we arrived at the venue. Talk about frenzied. All that doesn’t mean however, that you are entitled to any special treatment, because you know what, it is like that for all of us.

So here are the things that you (and I don’t mean you, I mean the other people

So what can be done?

To be honest, this is not all on us, and yes, I was guilty of these type things early on in my feis dad career, but if I can change…

Remember, we are all in this together, and each of us either contribute to the solution, or to the problem. Don’t get irritated if someone points out that you may be contributing to the problem. And on feis days, try to remember this one piece of wisdom from a fairly popular old book, ‘do unto others as you would have them do to you’.

I'm a Western Region Feis Dad and I had never heard of "camping" in this context until our dancer competed at a feis in Minnesota this past year. After I got over being scolded about camping in a no camping zone (I had no idea what the poor volunteer was talking about), I decided I liked the concept a lot. I have never seen "camping" in the Western Region Feiseanna. I wish we had it.

'Attentive managers, respond promptly to all questions, they don't confuse the items in the order'