Why do Irish dancers have straight arms?

Read the various theories behind this distinctive feature of Irish dance! 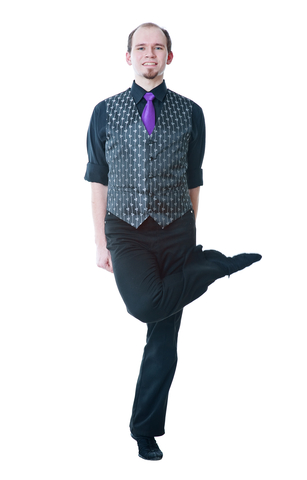 One of the main features of Irish dancing is the way dancers maintain a rigid upper body and keep their arms by their side whilst dancing.

While many of the contemporary and show dance styles of Irish dance have a more relaxed upper body and make use of the arms, the traditional form of Irish dance still keeps the arms close to the sides of the body.

The truth is that no one knows for certain what the real answer is but here we take a look at the various theories behind this distinctive feature of Irish dance..

Many alleged reasons relate in some way to the English occupation of Ireland, and the subsequent suppression of Irish culture.

One story is that a group of Irish dancers were brought to dance for the Queen. These dancers refused to raise their arms to her, and kept them rigidly by their sides as they danced out of defiance, and possibly to show they were not enjoying themselves as they danced for her and the English.

It is quite possible that this event actually happened. The Queen in reference is probably Elizabeth I. She reportedly enjoyed Irish jigs, and it is known that dances of Irish origin were danced in her courts. The dancers may have been called to the courts for her entertainment. Also, when royalty arrived in Ireland they were greeted at the shore by Irish dancers.

Their defiance would be natural after the suppression they had been subjected to for centuries, since Irish culture was outlawed by the Statute of Kilkenny in the 14th century.

However, it seems strange, considering this law, that the Irish were called to perform their own dances.

Other stories relating to the English tell how the Irish would go into pubs, and dance behind the bar with their upper body straight so that the English would not be able to tell they were dancing.

A variation on this, tell how they danced in their gardens, with their legs behind the hedges.

Perhaps this reference to hedges has been mixed up over the years and actually refers to the Hedge Schools, the secret schools where Irish culture was taught in secrecy throughout the suppression.

Similar theories are often also heard with a reference to the clergy. It is often said that the Catholic Church disapproved of certain aspects of Irish dance, and would do what they could to control or stop it. But the people would dance straight armed so that if a passing priest looked through the window of the house he would not realise they were dancing.

All these ideas are rather sketchy, and it seems unlikely that any person, whether they be English or Clergy, when seeing a person bouncing up and down, would pass without suspicion of what they were doing!

As already mentioned, Catholicism also seems to be a theme for these stories. Apparently the Church did not want boys and girls to hold hands. To stop this they made them hold their arms by their side.

Another idea is that, at a time of puritanical Catholicism, the Church in effect ironed the fun out of Irish dancing to make it reflect Christian ideals. The dancers had to keep their backs straight, their arms down and the smile was taken off the face.

The most believable theory, which is supported by many historians of Irish dance, is that the Dance Masters of the 18th century were responsible. They liked etiquette, and disapproved of the unruly arm movements of Sean Nos dancing. They therefore made their students dance with their arms in a fixed position, holding a stone on the hand to keep them in a fist.

It is thought by some that they may have originally made dancers hold one or both hands on the hip, and the completely straight arms came at a later date. Perhaps it was the church, as stated in the previous theory that was responsible for this?

However we came to dance with our arms straight, it remains today, and helps make traditional Irish dance so distinctive in a world where no other form of dance expects perfect balance without the use of the arms.